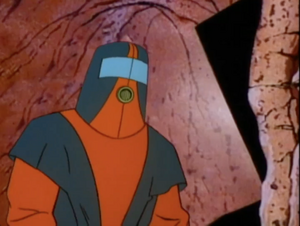 Moltar is the director of Space Ghost Coast to Coast. He was originally one of Space Ghost's villains in the original Space Ghost cartoon. He is also notable for being the first host on Toonami.

Relationships with other characters[]

Moltar has a pretty strong bond with Zorak, as they both were formerly evil villains and they hate Space Ghost. Though, in episodes such as Justice Hole, Zorak seems to ignore Moltar and tries to act cool around the guest, Dave Thomas.

Moltar despises Space Ghost, but he doesn't yell at him as much as Zorak does. Moltar doesn't bicker with Space Ghost too much, and mostly just makes a few comments that may just be ignored by him.

Moltar was the host of toonami before being replaced by TOM for unknown reasons.

Community content is available under CC-BY-SA unless otherwise noted.
Advertisement